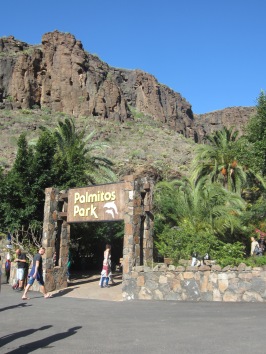 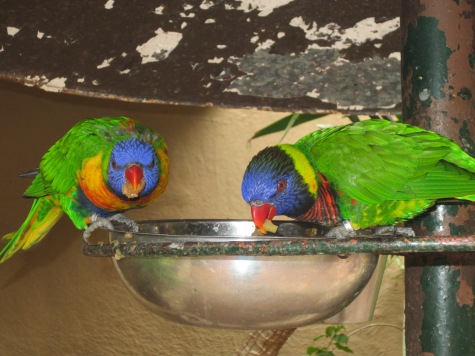 There will always be love in my heart for zoos and botanical gardens, for that display of what nature has to offer, preferably in such a way that feels natural and good to all that is on display for you to see and enjoy.

There is a small park here, nestled high up in the mountains and just getting there is an experience on its own,

the bus winding up narrow mountain road, where in some places it is really too narrow for more than one vehicle to pass, though some still try. Imagine the breathless moments when a taxi tries to overtake a large bus on a small road which drops down into large rocky fields where only cacti seem to thrive.

But the park was like a pleasant oasis up among the craggy rocks, filled with palm trees of all sorts, as well as leafy plants and trees that you could recognize as those we keep in small pots back up north. The air feels high and clear, mountain air, though that is only what I recognize it as in hindsight.

As it is placed in such a special location, like a hollow up in the mountains, nestled in like the roost of some huge bird, the park isn’t very large, but they have built up their animal exhibits to fit in well with nature, no demolitions to alter the landscape there.

But that also means the kind of animals they can keep are limited to those who do not require much space to be content and happy. There are lots of birds, most of them several breeds of parrots. The birds seem to be their specialty, the place is known for their bird shows and those are always well attended by the visitors. Since last time they have added a dolphin show to their schedule, but this one I stayed away from. To have a large pool of some dolphins in such a place is probably the only truly unnatural thing they have and I did not want to support it.

What I did love was the raptor show. Besides parrots and such tropical birds they also keep a number of birds of prey and these they show up to their best in this show, in a stadium that is the highest point of the park, nearly up among the tips of the mountains and it is a grand thing to see eagles let loose to soar high, high up on the thermals, to return later when called. There were some other birds too, harriers and falcons and a great vulture, which were handled and showed to visitors more closely. At the end, after they had managed to get two out of three eagles to return (the winds blew to the south and the birds felt it more natural to follow that instead of returning right away), they had a photo shoot and close up session with not just one of the great bald eagles, but also an eagle owl, the largest owl we have in Europe. That was easily the highlight of the day, a memory to treasure and the money for those tickets were well spent.

Then there was time to see the other animals, the meerkats, caimans, emus and gibbons. An aquarium that houses, among other things, a large tank with local fish was a nice touch.

The trip back down after all was said and done, after another show where parrots showed off all sorts of things they can be taught, after the purchase of souvenirs and collection of photos, was a bit more of a bore, just sitting there, trying not to fall asleep and feeling your ears pop as the bus descended further and further down.

It was a nice day spent away from the hotel, from the normal routine of baking by the pool that you are wont to fall into, and besides some more disagreements with family I would say it was one of the best days of the entire trip. To walk among the greenery, the cacti, the trees, when it is far drabber down in the flatlands near the beach, to hear the squawking of parrots and the singing of birds, now that was a nice experience, good for the spirit.

I probably would go again, if I returned here.

I've discovered that I need to write every day to stay sane and in the process of honing my skills I produce some rather good pieces that I want to share with the world.

The hope is to one day get paid for what I produce with my own hands and my own mind.